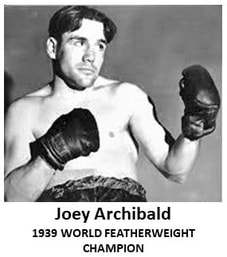 Boxing's rich tradition in Providence started way back in 1890 when George "Old Chocolate” Godfrey knocked out Patsy Cardiff in the 16th round.  Providence was a hot spot for the sweet science at places like the Infantry Hall, Marieville Gardens, Elk's Auditorium, Rhode Island Auditorium, Arcadia Ballroom and the Strand Theater.  The first professionally top ranked boxer from Rhode Island was heavyweight Jack Ashton from Providence.  Ashton was a sparring partner of "The Boston Strongboy" John L. Sullivan.  He debuted in 1885 and knocked out 28% of his opponents.  Al "Bearcat" Shubert of Warren was a former New England Bantamweight champion.  The future featherweight debuted in 1912 and had a career record of 86-23-25.  Paris Apice of Newport won the HW National Junior AAU belt in April 25, 1929 at Chicago  and the Rhode Island, New England, and International Championships at Chicago in the flyweight division.  Apice finished with a 66-54-4 career record.  Providence's Romeo "Johnny" Curcio had an undefeated reign as New England welterweight and middleweight champion between 1934 and 1937.  Joey Archibald of Pawtucket attended Providence College before his boxing career took off and once studied for the priesthood.  Setting himself up for a title shot on September 12, 1938 he defeated Tony Dupre, former holder of the 1936 USA New England Bantamweight Title, in a ten-round points decision at Griffith Stadium in Washington D.C.  He became NBA World Featherweight Champion in April 1939 and finished with a career 60-42-5 record with 29 KOs.  Ralph "The Ripper" Zanelli of Providence held both the New England welterweight and middleweight titles and held a record of 115 wins with 30 losses in a career that career spanned 20 years.  Beginning at the age of 17  within three years he held the lightweight, welterweight, and middleweight Rhode Island Amateur Titles.  He was a Golden Glove winner in 1936 culminating a 300-bout amateur career.  Tony "Tarzan" Costa of Woonsocket had career record of 61-23-5 as a featherweight and beat Joey Archibald on May 10, 1943 at the R.I. Auditorium in a majority decision.  Larry "Dynamite" Bolvin was a featherweight from Providence from 1939 to 1946.  "Dynamite" had a record of 44-17-2.  Lightweight George Araujo, born in the Fox Point neighborhood of Providence, was the world’s number-one ranked lightweight fighter when there was only one world ranking.  Araujo made his professional debut in July 1948 and immediately began fighting twice a month.  A powerful puncher, Araujo won his first 14 professional fights all by knockout.  He finished with a 58-9-1 record with 33 KOs.  The great heavyweight champion Rocky Marciano was 28-0 in Providence at the Rhode Island Auditorium.
Rhode Island Boxers (1885-1949)
*Rookie year