Some prominent Rhode Island golfers of the era include John P. Burke who was hailed as the most talented player ever produced in the state when he began competing in the 1930s.  He twice won the R.I. Junior Championship, the first at age 15.  In that same stretch, he also won the State Open in 1936 and 1938, making him as one of only four players in state history to win the Junior, Amateur and Open.  Daniel Fairchild was hailed as "the Boy Wonder" when he won his first State Amateur in 1907 at age 16, making him the youngest person ever to do so, a record that stands to this day and he went on to win the Amateur six times.  Woman golfers in Rhode Island included Elizabeth Gordon who won six RIWGA Amateur Championships including five straight from 1916-1920.  Elizabeth’s sister, Margaret, was also a fine player, winning the RIWGA Championship in 1925 and 1926.  Elizabeth went on to resign her amateur status in 1925 to become perhaps the first female club professional in America.  Glenna Collett Vare of Narragansett was one of the first great women players in the United States.  She was dubbed the "Queen of American Golf" as she dominated women’s competition in the 1920s and 1930s.  She went on to play competitively for more than 70 years.  She was among the six charter members of the women’s Golf Hall of Fame.  She won six U.S. Women’s Amateur Championships.   Jean Bauer of Providence was a 3 time R.I. State Golf Champion (1941-43) and 2 time medalist in the USGA National Amateur Championship.  Golf was first introduced to high schools in 1923 with Technical, Classical, Commercial, Cranston, Rogers, East Providence and Hope playing on Metacomet, Wannamoisset and Agawan Hunt course.  They competed for the Kenworthy Trophy.  In 1932 an Interscholastic Golf League was formed.
State Amateur Champions 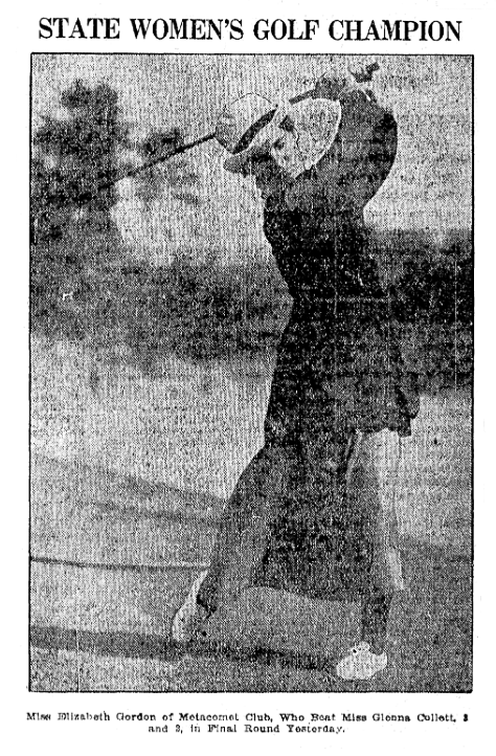